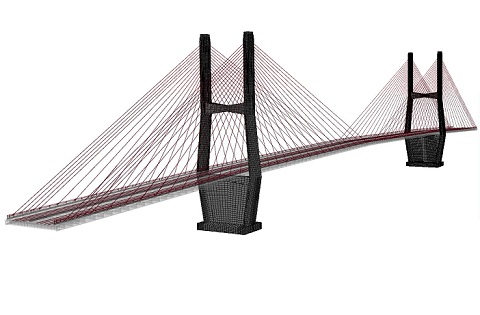 Computational structural mechanics is a well-established methodology for the design and analysis of many components and structures found in the transportation field. Modern finite-element models (FEMs) play a major role in these evaluations, and sophisticated software, such as the commercially available LS-DYNA® code, is available for the applications. These models are used, for example, in crashworthiness assessments of vehicles, such as autos, buses, trucks, trains, and aircraft, under accident conditions. Passenger models are also often included to determine occupant response and the potential for injury reduction mechanisms. Similar analyses are performed for highway safety systems, such as roadside hardware.

Other examples of the use of computational structural mechanics in the transportation field include the design and analysis of important components of the highway infrastructure, such as bridges. In these applications, models are being developed to determine the response of bridge structures to traffic loadings; wind loadings, which may result in so-called flow-induced vibration; and hydraulic loading, which may develop during severe weather events and can lead to bridge flooding.

The level of modeling detail in these applications is being increased substantially to provide greater confidence in the computed results. The use of FEMs with hundreds of thousands of elements requires the use of massively parallel computers, such as those available at TRACC, and appropriate software, such as LS-DYNA, that can take advantage of this parallel computing environment.